Here's the next addition to my Rusty Robots project in the form of a Black Tribe Gunbot: 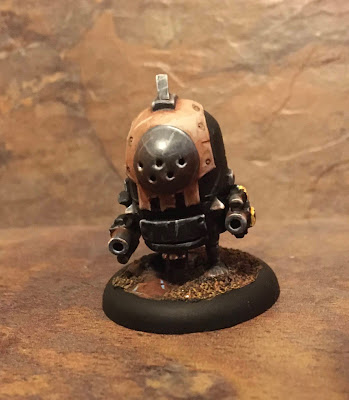 The Black Tribe are the villains of The Scrapyard and follow their Glorious Leader's commands to cause mayhem and constantly seek to take over the world. Fortunately they are pretty inept and Glorious Leader spends more time shouting at his underlings than actually getting much done. 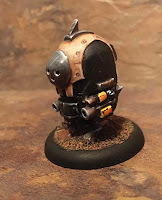 The Gunbot is one of the basic Black Tribe robots and is armed with a pair of short ranged blasters which make up for their lack of accuracy by sheer weight of fire.

Hopefully next week will see the tribe finished and I'll be moving onto the Blues!

In the meantime, All the best!

Here's the initial line up for my Red Tribe robots.

The force thus far consists of five Scrapbots armed with scrap pistols and a Forge Guard with a firepike. This will give me enough to get going with skirmishes in The Scrapyard and I eventually hope to have all the tribes done to this level and then slowly build up each into larger warbands and possibly add a few new tribes too!

I've also got some terrain put together in the form of the Lone Star Oil Bar: 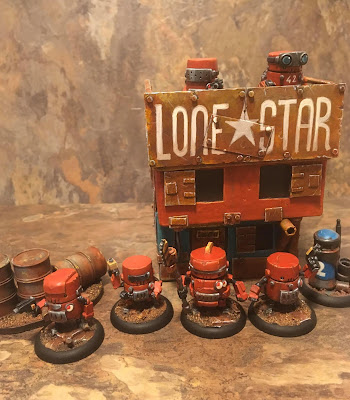 Hopefully next weeks update will have the initial lineup of the Black Tribe done as well as few odds and ends of scenic gubbins as I foresee The Scrapyard being a terrain heavy environment that will give me the opportunity to build lots of interesting stuff.
I'm thinking about making themed terrain for each of the locations of The Scrapyard but initially will be concentrating on The Rusted Mesa, the homeland of The Red Tribe so expect to see some interesting scrap piles, wind turbines and Scrap Settlements. 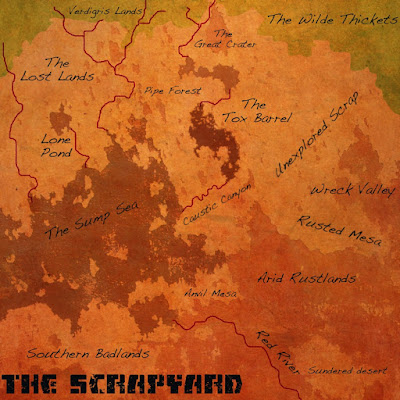 I'm going to be organising my way through my supplies box to see what terrain components I have which will effect what I eventually make but I look forward to getting some terrain making done!
In the meantime, All the best!
at January 03, 2021 2 comments:

Hi! Here's the next addition to my Rusty Robots project in the form of a Black Tribe Gunbot: The Black Tribe are the villains of The Sc...